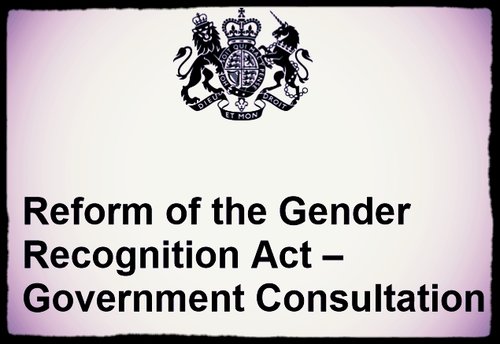 The deadline for responding to the GRA Reform Consultation is fast approaching (11pm 19th October).  Useful guidance on filling in the form is provided by Fair Play For Women.  The reform proposes the implementation of ‘gender self-identification’ – a man’s word is all that would be required for him to change the “sex” listed on his birth certificate and to gain greater access to women’s spaces.  The guidance provided by Fair Play For Women gives an excellent overview of how to respond to each of the questions.

We recommend that you also fill in your protected characteristics as defined under The Equality Act 2010.  The GRA Consultation wrongly asks for these ONLY from ‘trans’ respondents and there is no Equality & Diversity Monitoring form included for non-‘trans’ people (thanks to Clare B. Dimyon for pointing this out).  The government should be considering how different protected groups are affected and the interactions between them.  Fill in your protected characteristics and explain how you may be affected by changes to the GRA.

The GRA Reform Consultation and The Equality Act Inquiry

The Gender Recognition Act (2004) Reform Consultation asks how the government can make changing legal recognition of ‘gender’ easier for people.  It is due to end at 11pm on 19th October. 2018.  This reform could result in the implementation of ‘gender’ self-identification, which would allow people to change the “sex” listed on their birth certificate simply by requesting such a change (no medical evidence required).  The Equality Act 2010 will still allow exemptions – for example, to refuse a ‘transwoman’ access to a rape crisis centre / women’s refuge if this is deemed to be a proportional measure to protect female service users – however, these exemptions are not being properly utilised and changes to the GRA will make these exemptions even harder to enforce.

The Equality Act 2010 is also being reviewed via an inquiry into it’s efficacy– respond to the inquiry here to voice your concerns regarding the impact ‘gender’ self-identification may have on the preservation of single-sex spaces for women. The deadline for the Equality Act Inquiry is 5th October 2018.

The GRA Consultation document claims to have an interest in hearing a wide range of views and for the consultation to be as inclusive as possible:

“The Government is keen for this consultation to be as broad, open and accessible as possible”

It specifically states that the government is interested in hearing from those with protected characteristics under The Equality Act 2010:

“We are also interested in understanding how the current process of legally changing gender impacts upon those who have a protected characteristic under the Equality Act 2010.”

However, despite this assertion, the questions regarding protected characteristics are only asked to those who identify as ‘trans’.

The consultation omits to ask non-trans respondents about their protected characteristics.  This is discriminatory and unveils a disregard to the interests of other protected groups and how their lives may be impacted by reform to the GRA.

Barriers for One V.S. Protection for All

The consultation asks, “Whether the current system is presenting too great a barrier to legal gender recognition.”  (Reform of the GRA – Government Consultation, 2018, p. 24)

What is too great a barrier?   A barrier is in place to provide protection for ALL – and those with protected characteristics ought to be specifically considered.

The allowance of ‘trans’ people to acquire a GRC and to change their birth certificate – particularly if this enables them greater access to spaces otherwise reserved for the opposite sex – does have an impact on other citizens, producing ‘barriers’ in their lives.

Protected Characteristics under The Equality Act 2010

The protected characteristics under The Equality Act 2010 are:

Below are some of our thoughts on how people with each protected characteristic may be affected by the proposed changes to the GRA.

#   There are concerns regarding the mixing of sexes in schools (e.g. ‘trans’ students being allowed entry to the opposite sex’s toilets/changing rooms) and other areas where children are involved (e.g. Fair Play For Women describe how Girl Guiding allows boys who ‘identify’ as girls to share tents with girls, without even informing parents).

#  There is an issue of consent.  Even if adult women agree to allowing a male into their spaces (e.g. a women’s refuge), any children present are unable to fully understand and consent to this invasion of their privacy.

#  Children are being labelled as ‘trans’ for displaying ‘gender’ non-conforming behaviour.  ‘Gender’ self-identification, if enshrined in law, could perpetuate this trend and spread the myth that people can simply change their sex at will.

#   There is an increasing number of girls being referred to ‘gender’ clinics. This needs to be questioned. Research needs to be done into Rapid Onset Gender Dysphoria.

#  The ‘treatment’ of ‘trans’ identified children can result in sterilisation and can be seen as a form of eugenics, which is aimed at ‘gender’ non-conforming children / teenagers: in particular, this group includes gay and lesbian teenagers; those with learning disabilities and mental illnesses; and those with autism.

#  Gender Dysphoria is a mental illness.  How would changes to the GRA affect those with this condition?  The ability to legally change “sex” by self-declaration suggests that this is normal.  It could encourage those struggling with gender dysphoria to seek unnecessary surgery / hormone ‘treatment’, rather than to access therapy and learn to accept themselves.  While legal recognition is separate from applications for medical procedures, it can be seen as confirmation (social, state-sanctioned) that there is a genuine condition requiring the person to have surgery / hormones, when this is in reality not the case.

#  Mental illness is potentially co-morbid with ‘trans’ identity.  The consultation refers to the self harm and suicide rates of ‘trans’ people – there is no evidence that legal recognition of ‘gender’ alleviates these problems.  Regardless, legal document changes do not constitute a treatment for mental distress.

#  Exploitation of those with mental illnesses or learning disabilities can more easily occur if single-sex spaces are not respected.  ‘Transwomen’ are sometimes able to deceive others regarding their biological sex and mentally ill people may be more vulnerable to rape or sexual exploitation.

#  Carers for those with disabilities.  A disabled or elderly person requiring a carer should be able to request someone of the same sex.  This may be made more difficult under ‘gender’ self-identification.

#  There are a large number of ‘transitioners’ who are diagnosed with autism.  50% of children referred to the Tavistok clinic exhibit autistic traits.  This needs to be investigated to ensure autistic people are not being pressured into unnecessary surgery and hormonal ‘treatment’.

#  The implementation of self-ID could result in mixing of ‘transwomen’ who have had surgery with those who have not, without the individuals being aware of this.  Is there a conflict of interests between different ‘trans’ people?  For example, if a support group or refuge is provided for ‘transwomen’, would this accept only those who have had genital surgery or would it also accept fully intact males?

#  The consultation makes no mention of ‘trans’ people who change their mind and ‘detransition’.  How would they be affected by changes to the GRA?  Would ‘gender’ self-identification lead to an increase in the number of people ‘detransitioning’?

#  There may be distress and trauma caused to the partner of someone who changes their “legal sex”.

#  ‘Trans’ people may be able to deceive partners regarding their biological sex.  They may be able to enter marriages / civil partnerships under the false pretense of being a certain sex, when in fact they are not.  It should be necessary for people to disclose their history of ‘gender reassignment’ when entering a marriage or civil partnership (or any intimate relationship).

#  Currently, the GRA requires that a married person wishing to change “legal sex” must acquire spousal consent.  This means the spouse can legally annul the marriage on a non-fault basis – for some, this has important religious ramifications and means that they are able to remarry, which would not be the case if they had to issue a divorce.  The consultation asks if this provision should be removed – this would force spouses to file for divorce if they didn’t wish to remain married to someone undergoing a “legal sex change”.

#  Pregnant women may want to request that no males are present when giving birth, for example.  ‘Gender’ self-identification could make it more difficult to make this exemption under the Equality Act 2010.

#   Women may want to enter single-sex spaces to breast-feed.

#  Racist analogies are often made between black women and ‘trans’ women (by transactivists).  Black women who criticise ‘transgender’ practice and ideology are labelled ‘transphobic’.  Abuse of black women by transactivists appears to be taken less seriously.  Under the guise of ‘transgenderism’, white males are able to label themselves as an oppressed minority, and to hide behind this status when giving abuse.

#   Some religions prohibit mixing of the sexes.  Fair Play For Women point out that although exemptions may take place in religious places (e.g. mosques, other places of worship), ‘gender’ self-identification will restrict participation in public life for some women (e.g. limited access to sports, toilets, health care, due to a lack of guarantee that these spaces are male-free).

#  This protected characteristic also includes “lack of belief” – for example, the lack of belief in ‘gender’.  People shouldn’t be forced to accept that the concept of ‘gender identity’ has any substance or any impact on actual biological sex.  The consultation document as a whole is ignorant of the right not to believe in ‘gender’.

#  We believe that people’s beliefs and practices (e.g. ‘gender reassignment’) regarding ‘gender’ are already protected under the Equality Act 2010, under the protected characteristics of both ‘gender reassignment’ and ‘religion or belief’.  The Gender Recognition Act 2004 is unnecessary and shows disregard to the beliefs of those who don’t subscribe to ‘gender’ ideology.  The law should deal with facts; nobody’s God should be enshrined in law.  It should not be possible to make changes to the “sex” listed on a birth certificate unless a genuine mistake has been made (and in cases relating to rare intersex conditions).

#  Arguably, the largest clash of rights will occur between the protected characteristics of “sex” and “gender reassignment”.  This issue is confused by the conflation of the terms “sex” and “gender” within the consultation document.

#  The practice of ‘transgenderism’ acts as a form of homosexual conversion therapy.

# Gay men and lesbians who feel unable to accept their feelings of same-sex attraction may desire to change their “sex” if they are brainwashed into believing that this is possible (in reality it isn’t).  The law should not play a role in convincing people that fantasies can become reality (i.e. legal recognition of ‘gender’, if it involves changing the “sex” listed on a person’s birth certificate, indulges the delusion that a genuine “sex change” has taken place.  This is impossible.  The law should deal with facts, not fantasies).

#  Some ‘transwomen’ claim to be lesbians despite being biological males and often retaining male genitalia.  They demand access to lesbians’ women-only spaces and communities.  This situation may deteriorate further if ‘gender’ self-identification is made law.

Remember to respond by 11pm 19th October!  We will be posting more advice and information on this topic on the run up to the deadline.  We also recommend viewing the guidance provided by Fair Play For Women.

Scroll back to top